Campaign to save free parking launched by councillors 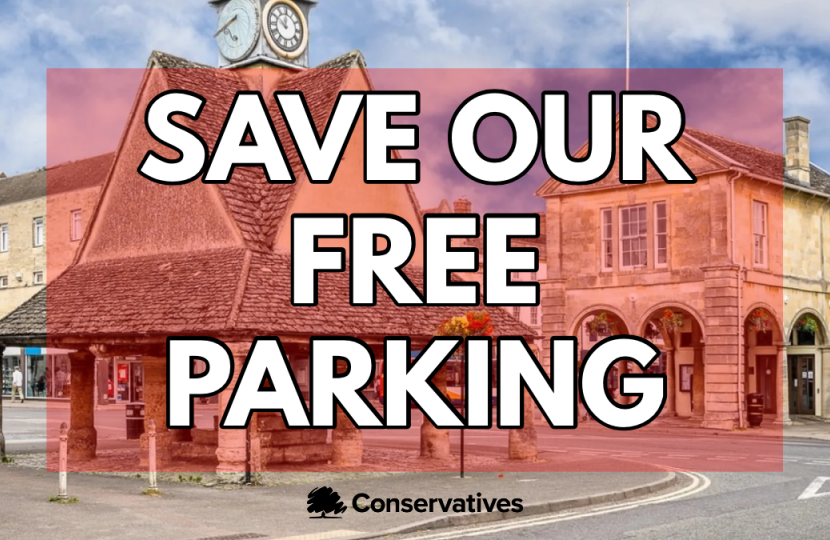 West Oxfordshire District Council which is run by the Conservatives has long promoted their free parking policy with a number of car parks across Witney and other towns in the district offering parking facilities at no cost to local residents.

The Conservative Councillors are now concerned that the new Liberal Democrat led administration at Oxfordshire County Council are looking to impose the charges in West Oxfordshire. The news comes after a meeting took place in the town of Woodstock with the Liberal Democrat cabinet member for highways meeting the town councillors to discuss the parking concerns and the possibility of implementing parking charges in the town.

Cllr Liam Walker said, "Our free parking policy is a much needed support for local businesses not just in Witney but in our other towns in West Oxfordshire along with saving residents money especially in this challenging time. What we are seeing at the county council under this new Lib Dem-led administration is our council tax going up 5% this year, parking charges being tripled in Oxford, and now the risk they will start charging residents to park in West Oxfordshire."

He added, "This is nothing more than a stealth tax to get more money from residents to pay for more of their grand projects in Oxford city. We cannot let them do this!"

The news of parking charges trebling in Jericho in Oxford by the county council in their recent budget was met with frustration from local businesses saying the rise in charges will be "devastating for struggling traders".

The Liberal Democrats who also run the Vale of White Horse District council have in their recent budget in February also voted to scrap the 2 hour free parking policy in the district as well as increasing parking charges.

In December last year Cllr Tim Bearder responded to a question from Cllr Walker which asked about what plans Cllr Bearder had for charging for on street parking in Woodstock and West Oxfordshire. Cllr Bearder who is the cabinet member for highways at the county council said the plans discussed with the town council, "include both Pay & Display on-street parking within the town centre, along with a resident parking scheme. In respect to West Oxfordshire area as a whole, we will see how Woodstock progresses and is received, and if successful we may consider appropriate measures in other towns in West Oxfordshire."

Cllr Michele Mead, the Conservative Leader of West Oxfordshire District Council said "I am really concerned about this move from the County Council to start exploring options to charge residents for parking in West Oxfordshire. I have recently received notification from the Lib Dem Cabinet Member for Highways that they want to terminate the agreement in place with WODC and instead OCC will carry out on-street parking enforcement in the district. After the pandemic we should be doing all we can to support our local businesses and high streets rather than deterring people from visiting our towns due to these extra unnecessary costs."

Cllr Mead added, "Only my Conservative councillors are fighting to keep the free parking policy in place and I encourage everyone to sign our petition to the highways cabinet member and the leader of the county council."

Local businesses also shared their concerns with Richard Martin from Witney Blanket Hall adding, "I’ve lived and had visitor businesses in West Oxfordshire since 1982, and there is no doubt that free parking is something visitors are always commenting on as a great advantage to the district. Even now, we find visitors coming from near Cirencester to shop in Witney because of the free parking."

"What worries me is that OCC have taken advantage of the reasonable closure of the High Street in Witney during the time of COVID, and decided to keep it closed permanently. This is in spite of the united opposition of the traders here, and in spite of their own consultation showing a majority in favour of keeping the street open."

Mr Martin added, "OCC have already started to encourage the ramping of parking charges elsewhere in the county, so it's therefore very important to nip any idea of stopping free parking very firmly in the bud!"

The petition that has been created by the councillors can be signed here: https://www.change.org/p/keep-free-parking-in-west-oxfordshire

The new Conservative team at West Oxfordshire District Council has pledged to hit the ground running to turn West Oxfordshire blue again. Following the local elections on 5th May 2022 no political party secured an overall majority.