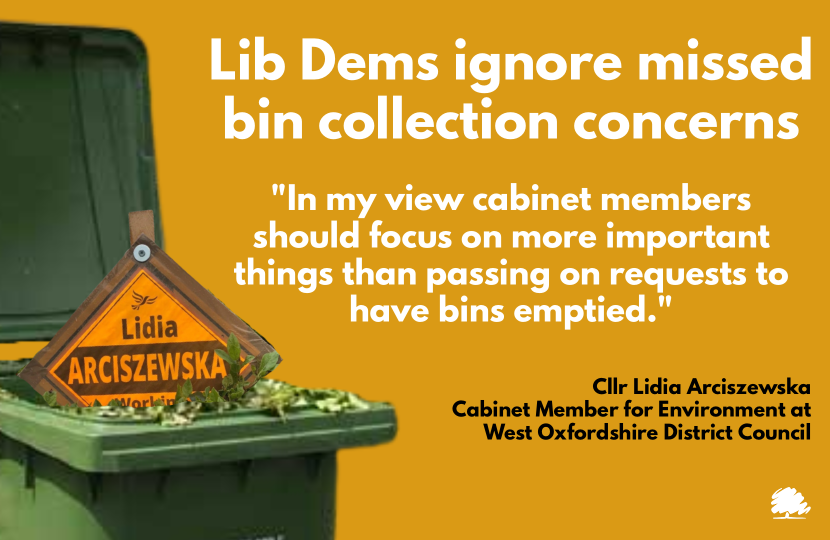 A district councillor in West Oxfordshire has been left disappointed at an email response he received from the new Lib Dem cabinet member for environment at West Oxfordshire District Council.

Cllr Ted Fenton, who represents the Bampton and Clanfield ward, emailed Cllr Lidia Arciszewska, after concerns were raised by residents about missed recycling collections in Bampton. Cllr Arciszewska is the new coalition cabinet member responsible for the environment which includes the waste collection service managed by Ubico on behalf of West Oxfordshire District Council.

In the email dated Wednesday 15th June Cllr Fenton reports that despite assurances the recycle collection would happen it was sadly still outstanding. In a short reply only minutes after sending the email Cllr Arciszewska responded, “The only way to reassure you that the bins would be emptied tomorrow would be if I could empty them by myself – which I am not able to do.”

Cllr Fenton was surprised to receive such a sharp response from the cabinet member especially given that waste collection is a service managed by her portfolio responsibility in West Oxfordshire.

In a further email Cllr Arciszewska then replied stating, “In my view cabinet members should focus on more important things than passing on requests to have bins emptied.”

Upon receiving the above email Cllr Fenton was left disappointed that a cabinet member responsible for waste collection didn’t feel that getting bins emptied was a priority. Cllr Fenton said, “I find it astonishing that a cabinet member, who is paid an extra allowance for doing this role, doesn’t feel that it’s her responsibility to deal with a valid complaint from a resident. A resident who pays their council tax for services such as waste collection. In all my years of being a councillor I have never had a response like this from a cabinet member and I really hope that the new administration at WODC doesn’t regard all the things that matter to residents as not being critical enough for them to focus on. I think residents expect and deserve better than this."