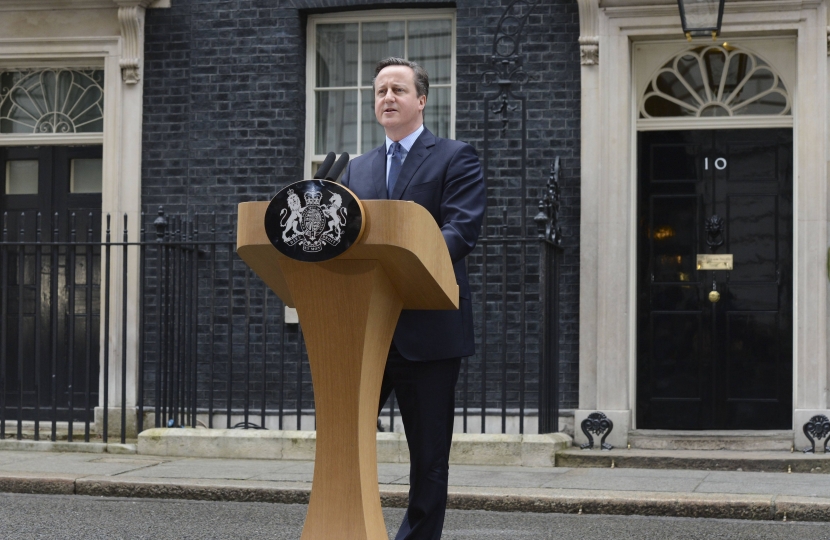 (This is the view of David Cameron MP and not promoted by the Conservative Party which remains neutral on this issue.)

On Saturday, David Cameron announced the date of the EU referendum outside Number 10 Downing Street.  Read the full speech below:

“This morning I have just chaired a meeting of the Cabinet in which I updated them on the special status we have secured for Britain.

And the Cabinet agreed that the Government's position will be to recommend that Britain remains in a reformed European Union.

Now I want to speak directly to the British people to explain why.

We are approaching one of the biggest decisions this country will face in our lifetimes.

Whether to remain in a reformed European Union - or to leave.

The choice goes to the heart of the kind of country we want to be.

And the future that we want for our children.

This is about how we trade with neighbouring countries to create jobs, prosperity and financial security for our families.

And it is about how we co-operate to keep our people safe and our country strong.

I know there will be many passionate arguments over the months ahead.

And individual Cabinet ministers will have the freedom to campaign in a personal capacity as they wish.

But my responsibility as Prime Minister is to speak plainly about what I believe is right for our country.

I do not love Brussels. I love Britain.

I am the first to say that there are still many ways in which Europe needs to improve - and that the task of reforming Europe does not end with yesterday's agreement.

And I will never say that our country couldn't survive outside Europe.

We are Great Britain - we can achieve great things.

That is not the question in this referendum.

The question is will we be safer, stronger and better off working together in a reformed Europe or out on our own.

I believe we will be safer in a reformed Europe because we can work with our European partners to fight cross-border crime and terrorism.

I believe Britain will be stronger in a reformed Europe because we can play a leading role in one of the world's largest organisations from within, helping to make the big decisions on trade and security that determine our future.

And I believe we will be better off in a reformed Europe because British businesses will have full access to the free trade single market, bringing jobs, investment and lower prices.

Let me be clear. Leaving Europe would threaten our economic and our national security.

Those who want to leave Europe cannot tell you if British businesses would be able to access Europe's free trade single market or if working people's jobs are safe or how much prices would rise.

All they are offering is risk at a time of uncertainty - a leap in the dark.

Our plan for Europe gives us the best of both worlds.

It underlines our special status through which families across Britain get all the benefits of being in the European Union, including more jobs, lower prices and greater security.

But our special status also means we are out of those parts of Europe that do not work for us.

Three years ago I committed to the British people that I would renegotiate our position in the European Union and hold an in-out referendum.

Now I am delivering on that commitment.

And whatever your decision, I will do my best to deliver it.

On Monday I will commence the process set out under our Referendum Act.

And I will go to Parliament and propose that the British people decide our future in Europe through an in-out referendum on Thursday, the 23rd of June.

The choice is in your hands.

But my recommendation is clear.

I believe that Britain will be safer, stronger and better off by remaining in a reformed European Union."