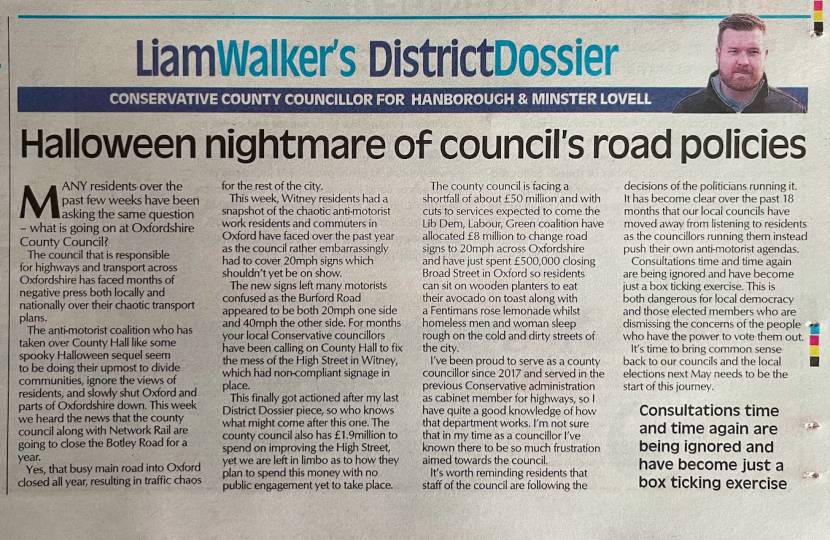 Many residents over the past few weeks have been asking the same question - what is going on at Oxfordshire County Council? The council that is responsible for highways and transport across Oxfordshire has faced months of negative press both locally and nationally over their chaotic transport plans.

The anti-motorist coalition who has taken over County Hall like some spooky Halloween sequel seem to be doing their upmost to divide communities, ignore the views of residents, and slowly shut Oxford and parts of Oxfordshire down. This week we heard the news that the county council along with Network Rail are going to close the Botley Road for a year. Yes, that busy main road into Oxford closes all year, resulting in traffic chaos for the rest of the city.

This week, Witney residents had a snapshot of the chaotic anti-motorist work residents and commuters in Oxford have faced over the past year as the council rather embarrassingly had to cover 20mph signs which shouldn't yet be on show. The new signs left many motorists confused as the Burford Road appeared to be both 20mph one side and 40mph the other side. For months your local Conservative councilors have been calling on County Hall to fix the mess of the High Street in Witney, which had non-compliant signage in place.

This finally got actioned after my last District Dossier piece, so who knows what might come after this one. The county council also has £1.9million to spend on improving the High Street, vet we are left in limbo as to how they plan to spend this money with no public engagement yet to take place.

The county council is facing a shortfall of about £50 million and with cuts to services expected to come the Lib Dem, Labour, Green coalition have allocated £8 million to change road signs to 20mph across Oxfordshire and have just spent £500,000 closing Broad Street in Oxford so residents can sit on wooden planters to eat their avocado on toast along with a Fentimans rose lemonade whilst homeless men and woman sleep rough on the cold and dirty streets of the city.

I've been proud to serve as a count councillor since 2017 and served in the previous Conservative administration as cabinet member for highways, so I have quite a good knowledge of how that department works. I'm not sure that in my time as a councillor l've known there to be so much frustration aimed towards the council.

It's worth reminding residents that staff of the council are following the decisions of the politicians running it. It has become clear over the past 18 months that our local councils have moved away from listening to residents as the councillors running them instead push their own anti-motorist agendas.

Consultations time and time again are being ignored and have become just a box ticking exercise. This is both dangerous for local democracy and those elected members who are dismissing the concerns of the people who have the power to vote them out. It's time to bring common sense back to our councils and the local elections next May needs to be the start of this journey.