Ian was elected as a County Councillor in 2005, retaining his seat in 2009. In 2007 he became Cabinet Member for Transport. From 2009 to 2011 his portfolio was Growth & Infrastructure covering strategic planning including transport, housing waste and the green & clean agenda. He was elected Leader of the County Council in May 2012.

He was a District Councillor at West Oxfordshire District Council from 2002 to 2012.  He served on the Cabinet from 2003 to 2006 with responsibility for Community Health & Safety implementing the new Licensing act regulations.

He was a member of Bladon Parish Council from 1998 to 2009. Ian is married with a young daughter who attended the Marlborough school and now works locally. Before becoming involved in politics Ian enjoyed playing golf but he still manages to watch Oxford United occasionally. 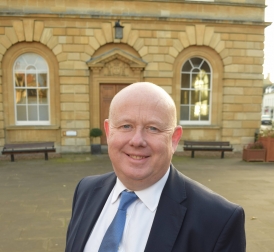